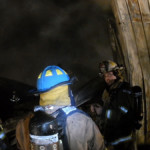 At 12:11 AM West Mead #1 was dispatched with Cochranton to assist Utica with a structure fire along US 322. Engine 28-12 responded with a full crew to the scene. Cochranton and Utica firefighters focused suppression efforts on a second building that had caught fire, while Department 28 spent the bulk of time on suppression and overhaul on the most damaged building, a post-frame metal garage. West Mead 1 firefighters stretched a 2.5 inch preconnected line to the rear of the building and operated two 1 3/4 inch hand lines off a gated wye, removing the metal panels to complete overhaul. Multiple departments in Venango and Mercer Counties were also called to assist, including Cooperstown, Sandy Lake, and Polk.

The fire apparently started with a burn pile spread by the 10-15 mph wind on Friday afternoon. The resulting brush fire damaged the post-frame building but was supposedly extinguished. In late evening the fire roared to life and spread to the second building before it was stopped. The post-frame garage was a total loss, and the second building suffered extensive damage. No significant injuries were reported.

About the Author: Ryan Zook