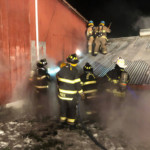 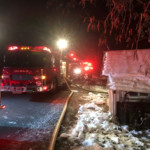 As a busy Wednesday at West Mead 1 was winding down, crews were alerted for a fourth incident, sending 28-12 and 28-13 to Cochranton to assist with a barn fire. West Mead 1 responded with 11 members to the fire near Sugar Lake. Arriving on scene our crews were directed by command to perform extensive overhaul operations inside the structure. Initial Cochranton units on scene had made an aggressive stop to the fire, ultimately saving the structure. While West Mead 1 was operating outside our response area, Meadville Central provided stand-by coverage.

About the Author: Brad Johnston

A second-generation firefighter, former Fire Chief Brad Johnston joined West Mead #1 as a junior and fought his first interior fire just after turning 18. At age 26 he became fire chief and served from 2006 to 2011. In 2015 he again assumed the responsibility of fire chief and served until 2020. Brad has over 20 years of active service with West Mead #1, and he is also active on the Crawford County Scuba Team.